You haven't used your session for a while. For your security, we will log you out soon.

Energise Africa uses cookies which are essential for the site to work. Any data collected is anonymised. By continuing to use this site, you agree to our use of cookies.
Cookie Settings
Capital is at risk and returns are not guaranteed. These are fixed-term bonds and are not readily realisable. Investments are not covered by the Financial Services Compensation Scheme (FSCS). Learn more. 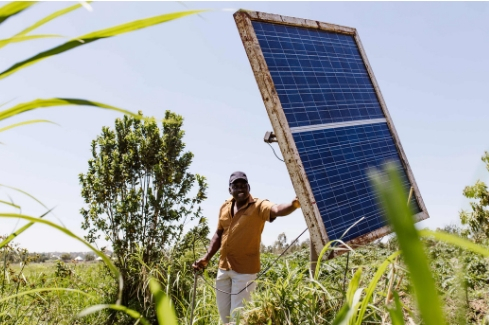 This article was first published on Guardian Labs.

As everyday activities go, flicking a switch barely even registers. But when Ibrahima Ciss pushes the small plastic lever by his door, a broad smile rises on his face. The 61-year-old is chief of Khaye Sérère, a rural Senegalese village in the western Thiès region, but he’s also the proud owner of a personal solar system, which is providing his home with electricity for the first time in his life.

Due to their remote location and low incomes, only 10% of rural households in west Africa have access to electricity. Most rely on an unhealthy concoction of candles, kerosene lamps and battery-powered torches, but new solar initiatives are providing an alternative.

In December 2015, Dakar-based Oolu Solar came to Khaye Sérère offering a solar home system (SHS) that allowed households to charge small electrical items and power lamps; Ciss was one of its first clients. “Before Oolu, I used to use one or two candles every night,” Ciss explains, sitting on a low, wooden bed, a lens-shaped lamp above his door brightening the room. “Each candle cost 1500 CFA (£2), but now I only spend around 110 CFA (£0.15) per day.”

Recurring costs add up: the World Bank estimated that sub-Saharan Africans were spending $10.5bn each year on non-renewable light sources. With solar power costing him just 3,500 CFA (£4.70) per month, Ciss now has more funds for daily activities, such as feeding the chickens and goats that totter in his courtyard.

Safer homes
Naked flames inside dimly lit homes tell their own story, but the real dangers of candles and oil-based lamps are more pernicious: kerosene is a “silent killer”, its noxious fumes contributing to a long list of coronary and respiratory problems.

Enhanced education
Maguette Sarr, 54, shares her windowless bedroom with her 12-year-old daughter Mody. Mody and her cousin Maty Seck, 13, used to finish school, “help with the housework and then study in the bedroom by candlelight”. Today, they learn their favourite subject of “calcul” (arithmetic) beneath a solar lamp, which has led to improved schoolwork and given Sarr peace of mind: “They would read in the evenings until they fell asleep. With the lamp, that is OK, with the candles, I was worried.”

Without having to strain their eyes or inhale smoky fumes, children can study longer and enhance their academic prospects. Assou and Biram Ciss, eight and nine, who live nearby Mody and go to the same school, now look forward to their homework with the additional hours of light solar provides.

Productivity boost
The productivity boon from elongating “daylight” is particularly felt among rural women, who are traditionally responsible for cleaning, cooking and caring for children. With solar, these duties are simpler and quicker to complete, making it easier to pursue economic activities, such as jewellery making or weaving.

Aicha Sow, 28, helps run a boutique (convenience store) in the dust-strewn backstreets of Khaye Sérère. While food essentials are sold from one side of the boutique, Sow uses the other to sell beauty products. Installing an SHS-powered lamp has given Sow “more time to sell” her products – from shampoos and soaps to fabrics and handbags – while also making it easier to find stock.

The old western complaint of not having enough hours in the day assumes a whole new meaning when productivity is governed by what time the sun sets. On Aissatou Ciss’s rooftop, the 70-year-old wipes clean her rectangular solar panel as it stares down the Senegalese sun. This small chore is worth it for the domestic benefits, she says, as “you [now] know what you are doing. You can see the counters. You know what products are in the kitchen – you can identify each one.”

Health help
As the village marabout (religious teacher and traditional healer), 77-year-old Abdoulaye Ciss gives advice to villagers and treats them for headaches, stomach aches or body pains. His eyes – like his room – light up when discussing his solar lamp, as he “can now help [villagers] later in the evenings”, when before there was “nothing to do”.

Social benefits
Producing brighter, safer, cleaner light is not the only trick these solar systems have up their sleeve. Small electrical items, such as radios, fans and electric shavers in barbershops, can be easily and securely charged, although the ports are mostly used for mobile phones. Rural villagers use mobiles for their economic as well as social benefit (farmers check market prices and pay for services with mobile money, for instance), as well as for their torches, music players and cameras. Without electricity, though, their utility is blunted.

Ibrahima Ciss used to travel 1-2km every few days to charge his phone and conserved its use at home. Now, it’s always on and by his side, which means he “receives information very early” and can react quickly to village issues that require his attention.

Environmentally friendly
He also used to buy lots of disposable batteries for torches, but his SHS has a rechargeable battery that lasts for 3,000 cycles (3-5 years). As such, harnessing the power of the west African sun improves both villagers’ wellbeing and that of the environment, by reducing the need for batteries and kerosene lamps, which produce around 200kg of CO2 each year. In a continent at the front line of the climate-change offensive, altering local people’s mindsets about energy usage is the natural counterattack.

Now, a UK-based investment platform, Energise Africa is aiming to help firms such as Oolu boost their social and environmental impact, while also providing a potential return.

It raises funds to lend to businesses in different countries in sub-Saharan Africa. Investors can participate by investing in the different companies through bonds offered by Energise Africa.

The upside is the potential returns are higher than you would get compared to other returns in the market, and the investment is helping African communities. The downside is the risk is higher because you are investing in a company and your cash is not protected by any UK government safety net. If the company collapses, there is the potential to lose everything.

All Energise Africa projects have been launched to address the problem of energy access for low-income families and businesses in sub-Saharan Africa – the minimum investment is just £50, making it widely accessible. Energise Africa bonds can also be held within an “innovative finance” Isa, meaning that people can also use part or all of their yearly £20,000 Isa limit and benefit from tax-free potential returns.

From boosting academic performance and saving money to enhancing safety, security, health and happiness, solar energy access has an outsized impact on those living off-grid in sub-Saharan Africa.

Standing outside his two-room concrete home, mango trees and rain water-filled urns glowing beneath his solar-powered spotlight, Ibrahima Ciss explains the profound effect. As to what’s the best part of having electricity? Simple: “It’s having electricity.”

Information about the risks of investing: This investment opportunity is not endorsed or administered by the Guardian; it is not a risk-free investment, and the returns are not guaranteed. In the worst-case scenario, if there was some kind of disaster/crisis/bankruptcy, you could lose some or all your capital, and you would not be able to get redress from the UK’s Financial Services Compensation Scheme or complain to the Financial Ombudsman Service, so you need to go into this with your eyes open. It is a direct loan to a company and not a savings or investment product offered by a financial institution – therefore, it is recommended that you are careful with the amount you invest. If in doubt, seek advice from a qualified independent financial adviser.


A solar vision for DRC A new chapter for solar energy access A thank you to our investors in 2020 Energising off-grid solar access in Africa - back to business (almost) as usual News from Energise Africa’s co-owner: Lendahand What we’re doing during the COVID 19 crisis and why Energise Africa's response to COVID-19 5 easy steps towards a greener Christmas Electricity for all in Africa is making progress, but it needs your help How to be a climate activist with your money The price of solar panels has fallen 99%... But will the trend continue? How cheaper household appliances are leading to more solar energy access in Africa Energise Africa launches industry first guarantee for new investors Water from the sun: how solar-powered pumps can energise a whole community The rise of the solar economy - introducing the firms lighting up Africa Power of the sun - how solar is improving community life in Africa Electric dreams: the solar enterprise that's transforming ethical investing Boost your finances and help families in need - a step-by-step guide 3 in 5 people take ethical considerations when shopping for financial services Azuri Technologies and Energise Africa launch latest UK crowd campaign to raise £2.5m

To download the Invest in Solar report, please enter your name and email address below

Capital is at risk and returns are not guaranteed. These are fixed-term bonds and are not readily realisable.